For L’Officiel Hommes Italia’s fall 2022 issue, Jordan Barrett plays an international spy that’s captured and taken to an undisclosed location for questioning. Sporting a Prada look, Jordan faces an interrogation by two men in suits, Marco Sapino and Eugenio F.—and it looks like they’re not going easy on him!

Jordan Barrett is the latest model to grace L’Officiel Hommes Italia’s pages, and he does it with style and attitude. The cinematic story, photographed by Steve Harnacke, takes on the feel of a vintage spy-thriller. But despite being surrounded by intrigue, Jordan keeps his cool.

In L’Officiel Hommes Italia, Jordan’s wardrobe is just as impressive as Harnacke’s photography. In the editorial, Jordan wears brands like Gucci, Hermès, and Burberry. Andrea Colace brings out the best in each piece with fresh styling choices, whether leather or a sharp modern cut. 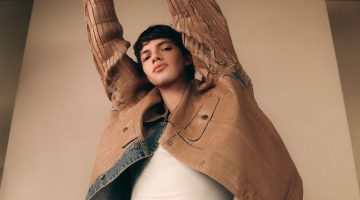